this is my page of youtube that you need if you dont know how to use the AB and how to setup in diferrents characters and skills.

i hope there is another event for Binky Bear ( ͒•ㅈ• ͒)

Would love a mobile version of the game. Would play every day especially during my 8 hour shifts at work

You could put some types of fashions (PDS) that were made by producers and hammers for fashions that give green bonuses and also trinkets with collection bonuses, productions, spell attack, attack, physical defense, stamina etc!  And they should put new items, prizes and lv stickers on the album!

Why is the pirate event so unfair?

Change the rates of the AO IGG SERVER.

*Make the Double skill exp the default of AO;

*And at the weekend double it again(It will be 3x);

*1/2 or 1/3 time for collection/production for producers.

Do some Balance in Classes

To make the game a little fun (to follow the map levels and to try to don't get a -99999999hit from mobs)
Example:
"Sword Spell, Each time the spell rank goes up both attack power and accuracy increases by 1 point. (Or maybe 2 or 3 points, got it?)"

Lizard(Good with spear, +10% dmg to spear or something like this, 2 or 5% speed too, only green, yellow, red and other colors skin);

Orcs(Good with Hammer and Heavy things +10% dmg and can carry more things, Stature 3 only);

New Production Class, "Carpinter"
He gets order after collecting some iron and wood to make FURNITURES and his furnitures get a little bit magical index, can make next tier homes, can upgrade homes, can customize color of furnitures etc...

New Production Class, "Engineer"
He get order when collecting some Iron and Wood, He creates Robots and can upgrade robots, can repair for free the robots, can smelt the Iron Types to create new tiers(so, you need 2 cooper and 1 tin(or 2tin) to make an iron bar to create new robots for example) and the Robot upgrades maybe can give 2 additional slots to a new inventory tab "robot backpack" (as the starter) and buff weight, mov spd, hardiness and some other things like these. Maybe he can be the Engineer of Totem Weapons too, creating new versions, repairing them..


New Magic Class, "Beastmaster"
Can have more than 1 summoned creature (maybe 4, 5?), the attack and defense of these creatures more than 50% comes of the player items, maybe can activate more than 1 pet too (3, 4? Just Like in Myth Angels Online?)

New Ranged Class, "Captain" (or Scout or something like this)
Can use traps, can set traps on map, his weapon, dagger and pistol(or a little crossbow), debuffs enemies and can capture them, when he donate to leagues, his values are 1.5x more than normal classes..

New Fighter Class, "Monk",
He use knuckles and some magic spells, eh... something like this. (I think will be good new weapon type in Angels Online, our last weapon type is Shadowblade I think... some years...)

Make the Totem War OUTSIDE the maps again, just like in the past, becoming PVP on those areas at Wednesdays.

Balance the game to attract new players, maybe putting a inicial video(esc skip) after you click in "Start Game" for the first time explaining everything that's happening in the Angels Online World.
Maybe can detach the User Interface of the angels online files too for players update it or change it, look at that beautiful Myth Angels Online interface, if we can study the interface code and be able to edit we can even create a more beautiful interface than this, It's more than 10 years playing in the same interface IGG!

IGG can heavy invest on ads, Angels Online can run in almost every lowest-spec computers. What good MMORPG games you can run with 512mb of ram and without RTX 3090?

These are new times, IGG & Userjoy.
You need to make the game easy for this generation of players, update the game and FINISH THE GAME SYSTEMS (Like Fusion, Card Book).


Really IGG AND Userjoy pay attention to these topics or we are just giving ideas to the heavens? We get response from them?

When we press INSERT (To sit), if we're with mounts, the mount disappear(oh found it, it's in my pocket)
It's a simple idea, let our mounts breath a little (I think my char weight a bit... Also my 300kg robots hidden in my small Koala backpack can weight a bit too)
I think Userjoy have the mount sprites (without player sprite over the mounts), they only need to move the mount sprite and let the player next to it, it doesn't appear to be hard to make!
One example that I made here..
(Maybe an checkbox on equipment at left or right side of mount to show it(like the img) when press insert or not(our today default) too) 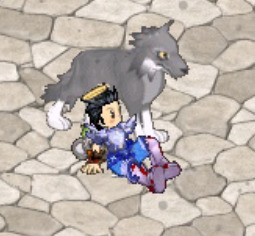 -storm- Rated on 2020-11-13 12:29:38
The rates proposal is good. The balance in classes/builds is always a recurring problem every expansion. The races idea is actually nice. For the carpenters, I think every prod should be able to make furniture, that makes the prod builds balanced. I like the beastmasters thing. Overall, your ideas are good. I really just don't know if IGG is willing to listen to these platforms. Frankly, they're just copy pasting whatever content is already reproduced from the base games. But still, everyone should be encouraged to think of more innovative ways to revive this game. It's a serious problem.

Fabio11 Rated on 2020-11-18 01:55:34
Hi Storm, thx for the reply! XD Maybe they can balance a bit (Angels online only with the Atlantis, Dungeon, Forest and Desert have a good balance, you can get stronger and keep evolving map-to-map but after this... It starts our nightmares) so we can gradually evolve on the new maps) Beastmaster may be an new class someday I think, It will be good to command many summons to attack enemies and create aggro themselves when I keep resting lol I know that part copy paste, I don't know what IGG can do with the IGGAngel Love server, I don't know what they can and what they cannot, developing the game only userjoy can but they accept IGG suggestions? :/

Signature
Step inside and hold on for dear life~ - Bring back Mysterious Garden, Megalith Plain, Sunflower Plain and Foggy Forest as conquerable territories for Totem War (could be more areas for 300+ or for lower levels like 100 or 99)

- I don't know if Modern Traffic cardset quests are bugged or the drops rates are insanely low... but please, fix the bugs or at least increase the drop rates a bit because as far as i know, no one has ever completed this cardset.

- Add better rewards to be exchanged with daily coins (200+ gears/rides/etc).

- Bring back old PDs and Rides to be collected with, as an example, daily coins or something like Straws.